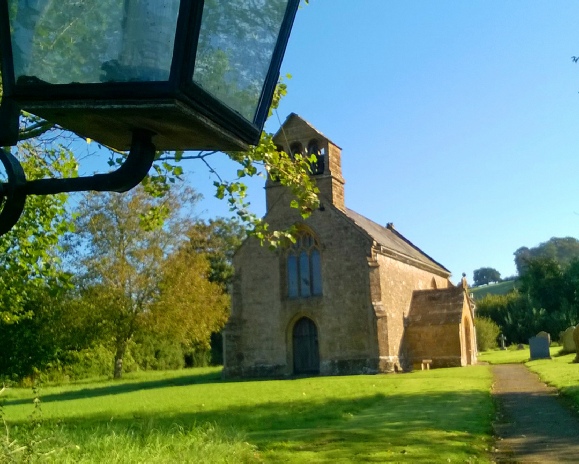 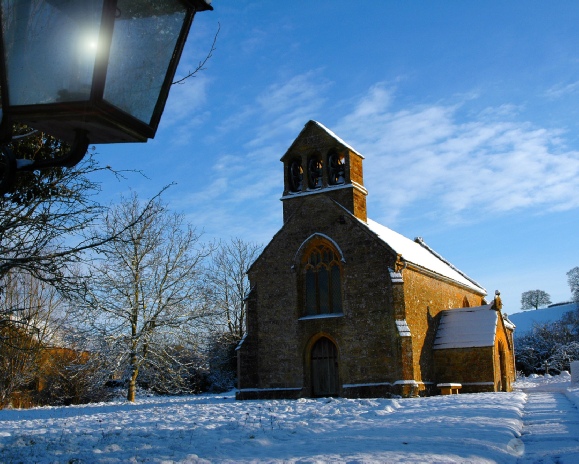 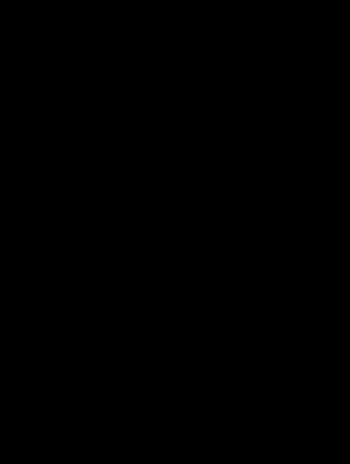 Every effort has   been made to try to determine the copy right of this publication.

Our initial interest was in the development of house plan, mainly related to the improvements of the 16th century. This was seen to take a variety forms, and the only generalisation that can be made is that, as very frequent in Somerset, all of the old houses emerged with cross-passages, of which the fireplace of the main living-room, or hall as it is more convenient to term it, formed one side. Our first examination of some of the houses, however, made us quickly aware of a remarkable concentration of elements of construction, largely new to us in Somerset. Repetition will be saved if we make some general reference to the way in which the  houses were first built, and it is convenient to treat some of the 16th century additions at the same time.

i. Crucks and post-and-truss constructions. All houses except one contain cruck frames, either simple or jointed, extending (so far as observable) down to a rubble plinth or, where a stone wall was original, to a substantial  depth in that wall. In one case only, house 111 iii, a later cruck frame stands on a ceiling beam. These frames are always internal, never at the end of a house5, and in most cases are associated with a hall formerly  open to the roof. Most of the houses also contain the construction known  as post-and-truss, in which posts carry a tie-beam. The tie-beam in turn  is the base for principal rafters, linked higher by a collar. The post-and-truss construction is typically at the end of a house, but may also be internal. Posts tend to lean slightly inwards and may be tapered at the base. As with the cruck frames, they extend to a plinth or to well down in a wall. At the top, the posts are markedly jowled, and since long tenons were possible on this account, there are no braces between post and tie-beam, save in one instance. Tie-beams project slightly beyond the posts and also beyond the bases of the principal rafters. There is a varying number  of struts between tie-beam and collar, from none at all to five. Only late trusses not carried on posts have a strut, or struts, above the collar.  In all cases which could be seen, rafters are joined at the apex by mortice and tenon. Gables are filled with vertical rods from tie-beam to rafter  and collar, and from collar to rafter, the upper end of the rods being inserted in holes and the lower in a long groove. In two observed cases, there is wattling on the rods as a base for daub. Among the plates, which  are arranged by reference to the individual buildings, nos. IV to VI are relevant.

Ridge-pieces are seldom visible. Those seen are square, set diamondwise in notches at the apices of the trusses. Purlins are always trenched. They are frequently in three rows, though sometimes in two, and in either  case the upper one is set high and the lower low down, so that wall-plates  wore unnecessary for the support of common rafters, particularly since there was stone or cob walling between the trusses6. All purlins project  considerably from the gables, except where there have been later alterations, so that the upper roofs would shelter the protruding end walls to be described  below. All joints seen were plain diagonal scarfs, normally at a rafter.

These are distinguished from side walls because of the very characteristic appearance, where they have survived. The posts-and-trusses were underbuilt with thick cob walls, the posts being almost flush on the inner side, so that the wall may project a foot or more under the gablc7. In one instance, the application of building regulations involved the destruction of one such wall which had settled so as to slope out a few inches at the top. At the foot, it began in a shallow trench, not on a plinth, but was nevertheless dry; and instead of showing a succession of courses of clay, it contained    a mixture of clay and stones, the latter ranging from pebbles to quite considerable lumps of rubble. This demolition gave an opportunity of examining the posts built into the wall for traces of sill-plates, the absence of which had already been noted in the case of exposed trusses, and was now confirmed8.

At the front, all of the houses are now faced in rubble. In some cases, this is obviously newer than what was there in the first place, but in two houses at least it appeared to be original9. At the back, cob survives in several cases. There was no evidence of early timber- framing, though traces of this had been found in a demolished late medieval building not far away10. On the contrary, such framing in one house, 111 i, belonged to a later development and is paralleled by discoveries elsewhere11.

In two houses, 111 iv and v, the original arrangement for voiding smoke was by the construction of a short bay integral with and at the end of the house. In one case this was visibly of post-and-truss construction, the gable above the tie-beam being filled by daub on rods12. (Plate VI, the studs and present rods being replacements).

Firehoods have been found in a number of areas other than Somerset, and in a variety of forms, ranging from a sort of daubed basket to a carefully framed timber structure, in which the spaces are filled by daub on rods. In Stocklinch, they have been found in every house studied except 111 vii, and are of the latter type. They are clearly distinguished from smoke bays, since they are superstructures to fireplaces created later than the building of the house. Such fireplaces usually have stone backs and sides (though the inner side may be timber-framed), with a wooden lintel. The starting-point of the hood is above the lintel, and there substantially below tie-beam level. The front of the hood and the side nearest the slope of the roof taper to a square hole at the ridge, above which a modern chimney replaces whatever was the original treatment.

Several examples have come to light elsewhere, mostly within a few miles, and we have ventured to 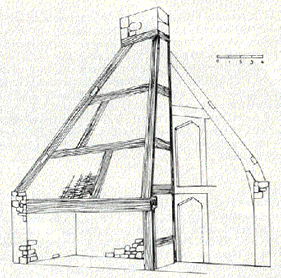 distinguish two types, here designated FH1 and FH2. FH1 has rectangular timber-framing, the panels usually being broader than they are high, with vertical rods as a basis for daubing. The fireplace and the starting-place of the hood are usually wide, occupying half or more of the width of the house. The type appears to be relatively early, and we provisionally propose it as being mid-Elizabethan. FH2 has long converging studs, from lintel level to apex, and in additional timbers the accent is on the vertical; and daubing is on lateral rods. The fireplace tends to be narrower, though t may still occupy up to half of the width of the house. Evidence will be mentioned in relation to particular houses for the type being relatively late, of the later 16th and early 17th century. Two FH2 hoods, in houses 111 iv and v, were constructed inside earlier smoke baysl3.

iii. Chimney stacks. The term is limited to rubble and mortar stacks. These, save for one lateral stack in house III ii, always project into a room,  being carried on the lintel, sides and back of the fireplace. 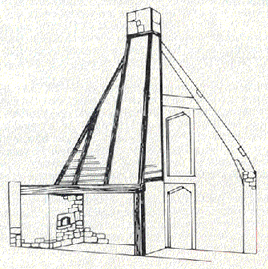 made with a draw knife from the arris to a vertical set-off a quarter or half an inch above the chamfer.' From the building in which they first recognised it, they gave the term 'Wern-hir' and this abbreviation is conveniently used here also. It is found in many other parts of England and Wales, and is generally regarded as of the late 16th century, being succeeded in the 17th by the scroll stop. In Stocklinch, we have been particularly interested in a variation found in two of the houses, 111 iv and vi, where on ceiling beams, the curve has been drawn off in two planes, for which Fox and Raglan used the term 'keeled'. At house 111 ii, there are such stops on the jambs of a wooden window frame. This type of stop was already familiar from other houses within a short range of Ilminster, associated with 16th century improvements, so that the existence of a local school of carpentry is possible14. At house III vi, the stops on a ceiling beam are doubly kneeled. 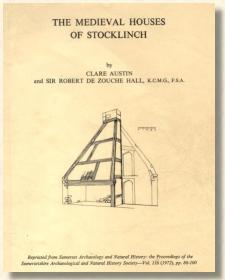